Woman Suffrage and the 19th Amendment

Beginning in the mid-19th century, several generations of woman suffrage supporters lectured, wrote, marched, lobbied, and practiced civil disobedience to achieve what many Americans considered a radical change in the Constitution. Militant suffragists used tactics such as parades, silent vigils, and hunger strikes. The records of the National Archives and Records Administration reveal much of this struggle.


As the 150th anniversary of the Seneca Falls Convention of 1848 approaches, historical documents and a script that the National Archives commissioned about the decades long struggle entitled Failure is Impossible serve as valuable teaching tools.

Students and Teachers of US History this is a video of Stanley and Christopher Klos presenting America's Four United Republics Curriculum at the University of Pennsylvania's Wharton School. The December 2015 video was an impromptu capture by a member of the audience of Penn students, professors and guests that numbered about 200.


The original production of Failure is Impossible occurred on August 26, 1995, for the National Archives commemoration of the 75th anniversary of the 19th amendment. The play brought to life both the facts and the emotions of the momentous struggle for voting rights. Beginning in the mid-19th century, several generations of woman suffrage supporters lectured, wrote, marched, lobbied, and practiced civil disobedience to achieve what many Americans considered a radical change in the Constitution. Militant suffragists used tactics such as parades, silent vigils, and hunger strikes. Much of this struggle is documented in the records of the National Archives. To dramatize the debate for woman suffrage, playwright Rosemary Knower was commissioned to write a narrative script, drawing on the Congressional Record, petitions to Congress, personal letters within the legislative records of the Government, and other archival sources such as newspaper editorials and articles, diaries and memoirs. The story was told through the voices of Abigail Adams, Elizabeth Cady Stanton, Frederick Douglass,Susan B. Anthony, Sojourner Truth, Frances Gage, Clara Barton, and Carrie Chapman Catt, among others.

The 19th amendment celebration was an example of the Arts and Culture Program's employment of theatrical and live presentation techniques to heighten public awareness and understanding of historic events. Over the years the National Archives has commissioned more than a dozen original plays based on the records in its holdings, presented the plays in the Archives' Theater, and shared the scripts with its Presidential libraries, regional archives, and other educational institutions and theaters. Time and again these presentations have demonstrated the effectiveness of using dramatic interpretation as an educational tool for bringing history to life. to The Constitution Of The United States

In July 1848 Elizabeth Cady Stanton and Lucretia Mott organized the first women's rights convention in Seneca Falls, NY.  It was here, that the woman suffrage movement was born. The attendees to the convention also included abolitionists who sought universal suffrage. The abolitionists goal was realized in 1870 when the 15th amendment to the Constitution, granting black men the right to vote, was ratified.


Women's suffrage, under the Convention on the Elimination of All Forms of Discrimination Against Women, adopted by the United Nations in 1979, is now considered a right except in several Muslim Middle Eastern countries that  continue to deny voting rights to women.

In the year following the ratification of the 15th amendment, a voting rights petition sent to the Senate and House of Representatives requested that suffrage rights be extended to women and that women be granted the privilege of being heard on the floor of Congress. It was signed by Susan B. Anthony, Elizabeth Cady Stanton, and other suffragists. Well known in the United States suffrage movement, Anthony and Stanton organized the National Woman Suffrage Association (NWSA) in 1869.

Memorial to Congress from

The ideological and strategic differences that grew among suffrage leaders during and immediately after the Civil War formally split the women's movement into two rival associations. Stanton and Anthony, after accusing abolitionist and Republican supporters of emphasizing black civil rights at the expense of women's rights, formed the National Woman Suffrage Association (NWSA) in May of 1869. The American Woman Suffrage Association (AWSA), founded 6 months later by Lucy Stone, Julia Ward Howe, and Thomas Wentworth Higginson, protested the confrontational tactics of the NWSA and tied itself closely to the Republican Party while concentrating solely on securing the vote for women state by state. In 1890 the two suffrage organizations merged into the National American Woman Suffrage Association (NAWSA). Stanton became its president, Anthony became its vice president, and Stone became chairman of the executive committee.


In 1919, one year before women gained the right to vote with the adoption of the 19th amendment, the NAWSA reorganized into the League of Women Voters.

Petition from Susan B. Anthony to U.S. Congress

The tactics of the suffragists went beyond petitions and memorials to Congress. Testing another strategy, Susan B. Anthony registered and voted in the 1872 election in Rochester, NY. As planned, she was arrested for "knowingly, wrongfully and unlawfully vot[ing] for a representative to the Congress of the United States," convicted by the State of New York, and fined $100, which she insisted she would never pay a penny of. On January 12, 1874, Anthony petitioned the Congress of the United States requesting "that the fine imposed upon your petitioner be remitted, as an expression of the sense of this high tribunal that her conviction was unjust." 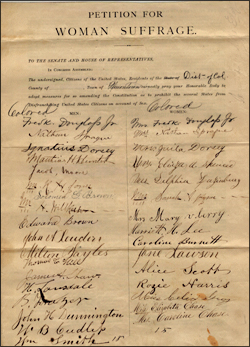 Wealthy white women were not the only supporters of woman suffrage. Frederick Douglass, a former slave and leader of the abolition movement, was also an advocate. He attended the Seneca Falls Convention in 1848, and in an editorial published that year in The North Star, wrote, ". . . in respect to political rights, . . . there can be no reason in the world for denying to woman the elective franchise, . . ." By 1877, when he was U.S. marshal for the District of Columbia, Douglass's family was also involved in the movement. His son, Frederick Douglass, Jr., and daughter, Mrs. Nathan Sprague, and son-in-law, Nathan Sprague, all signed this petition to the U.S. Congress for woman suffrage ". . . to prohibit the several States from Disfranchising United States Citizens on account of Sex."


In addition, a growing number of black women actively supported woman's suffrage during this period. Prominent African American suffragists included Ida B. Wells-Barnett of Chicago, famous as a leading crusader against lynching; Mary Church Terrell, educator and first president of the National Association of Colored Women (NACW); and Adella Hunt Logan, Tuskegee Institute faculty member, who insisted in articles in The Crisis, that if white women needed the vote to protect their rights, then black women -- victims of racism as well as sexism -- needed the ballot even more.

Association of Army Nurses of the Civil War Letter

Many of the women who had been active in the suffrage movement in the 1860s and 1870s continued their involvement over 50 years later. Mary O. Stevens, secretary and press correspondent of the Association of Army Nurses of the Civil War was one such woman. In 1917 she asked the chairman of the House Judiciary Committee to help the cause of woman suffrage by explaining, "My father trained me in my childhood days to expect this right. I have given my help to the agitation, and work[ed] for its coming a good many years."

By 1916 almost all of the major suffrage organizations were united behind the goal of a constitutional amendment. When New York adopted woman suffrage in 1917 and President Woodrow Wilson changed his position to support an amendment in 1918, the political balance began to shift in favor of the vote for women. There was still strong opposition to enfranchising women, however, as illustrated by this petition from the Women Voters Anti-Suffrage Party of New York at the beginning of U.S. involvement in World War I.

During World War I, militant suffragists, demanding that President Wilson reverse his opposition to a federal amendment, stood vigil at the White House and carried banners such as this one comparing the President to Kaiser Wilhelm II of Germany. In the heated patriotic climate of wartime, such tactics met with hostility and sometimes violence and arrest. 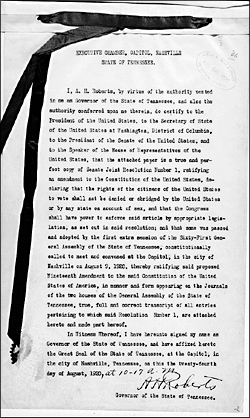 
On May 21, 1919, the Republican controlled House of Representatives passed the 19th amendment by a vote of 304 to 90, and the Republican controlled Senate approved it 56 to 25 on June 4th, 1919. Illinois, Wisconsin, and Michigan (All Republican controlled States) were the first states to ratify it. On August 18, 1920, it appeared that Tennessee had ratified the amendment--the result of a change of vote by 24 year-old legislator Harry Burn at the insistence of his elderly mother--but those against the amendment managed to delay official ratification. Anti-suffrage legislators fled the state to avoid a quorum and their associates held massive anti-suffrage rallies and attempted to convince pro-suffrage legislators to oppose ratification. However, Tennessee on August 24th, reaffirmed its vote and delivered the crucial 36th ratification necessary for final adoption.

The Democratic Party controlled state legislatures of Delaware, Maryland, Virginia, Alabama, South Carolina, Georgia, Louisiana, and Mississippi actually rejected the amendment.  While Democratic controlled States North Carolina and Florida did not even take up the matter until 1971 and 1969 respectively.

The Congressional Evolution of the United States of America

Presidents of the United States of America

Capitals of the United Colonies and States of America

Book a primary source exhibit and a professional speaker for your next event by contacting Historic.us today. Our Clients include many Fortune 500 companies, associations, non-profits, colleges, universities, national conventions, PR and advertising agencies. As a leading national exhibitor of primary sources, many of our clients have benefited from our historic displays that are designed to entertain and educate your target audience. Contact us to learn how you can join our "roster" of satisfied clientele today!

Primary Source exhibits are available for display in your community. The costs range from $1,000 to $35,000 depending on length of time on loan and the rarity of artifacts chosen.

*Republican Party - - is a defunct political party organized by Thomas Jefferson and James Madison in 1791. The Party went out of existence over the schism between John Quincy Adams and Andrew Jackson (both Republican candidates) over the Presidential election of 1824. Today, for the sake of expediency, political scientists incorrectly refer to it as the Democratic-Republican Party. Party members throughout its existence never utilized the name “Democratic-Republican.”

*** President of the Confederate States of America

No Taxation Without Representation

US Bill of Rights